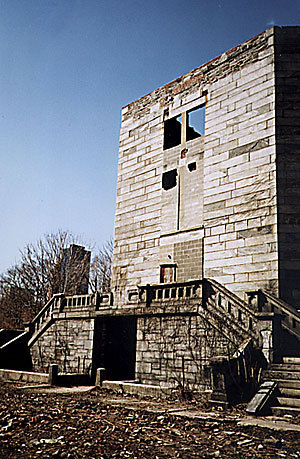 Copyright 1997-2021
Tricia Vita
No part of of this website may be used or reproduced in any manner without written permission.

As she surveys the ruins of the so-called Pauper Lunatic Asylum on this sliver of an island in the East River overlooking Manhattan, Judith Berdy, president of the Roosevelt Island Historical Society, says, "It takes a lot to knock down a 19th-century building." Today, all that remains of one of the country's first municipal insane asylums is the arson-ravaged Octagon Tower, once the administrative center and main entrance hall.

Fires in 1982 and 1999 destroyed 90 percent of the building's interior. Yet Berdy is optimistic that the National Register-listed Octagon Tower, abandoned for almost 50 years, will escape the fate of demolition by neglect. Becker & Becker Associates, a New Canaan, Conn., architectural firm whose forte is turning endangered landmarks into affordable housing, has sublet the five-acre property and is stabilizing the ruin. It's the first phase of a controversial $120 million project initially proposed in 1998.

Designed in the 1830s by Alexander Jackson Davis, a prominent architect whose credits include Lyndhurst, the New York Customs House, and several state capitols, the building was among New York's grandest. When Charles Dickens toured then-Blackwell's Island in 1842, he was horrified by the "lounging, listless, madhouse air" of the place but pronounced the building "handsome" and the cast-iron spiral staircase "elegant" in his American Notes. In 1887, the New York World's investigative reporter Elizabeth Cochrane, who wrote as Nellie Bly, got herself admitted to the women's asylum and wrote an expose that sparked a revolution in the treatment of mental illness.

Abandoned in 1954, the asylum was partially demolished during 1970s urban renewal, when the island was transformed into a high-rise residential community. "I call it cement-itecture," says Berdy, who joined the one-year-old historical society when she moved here in 1977. Now she leads walking tours to the island's six city landmarks, which include both the fully restored Chapel of the Good Shepherd and the deteriorating "Renwick Ruin," a remnant of the smallpox hospital designed by James Renwick Jr., the architect of Manhattan's Grace Church.

The plans for "Octagon Park" include the $10 million restoration of the gray-gneiss tower and reconstruction of its wooden dome into 30,000 square feet of public space, offices, and a health club. What makes the project economically viable is the construction of 500 apartments in two new residential wings duplicating the footprint of the original building. That's where the controversy comes in.

"One thing I've learned about new construction in a preservation context is, often there's no agreement as to what approach is correct," says Bruce R. Becker, who worked for a year with the state historic preservation office on the original design for Octagon Park, only to have it rejected by the National Park Service for having an "an overly historicized appearance."

Returning to the drawing board, Becker's team produced a revised design that met the Park Service's standards that require new construction to be clearly distinguished from restored landmarks. But the increased height of the building and the elimination of a mansard roof has drawn mixed reviews from residents and preservationists.

Some see the scale of the new construction as detracting from the landmark. Others view it as a necessary trade-off in a less-than-perfect world. "If we were to reduce the scale of the Octagon project, it would no longer be financially feasible," explains Becker, whose reliance on historic preservation and low-income-housing tax credits to finance the project carries its own set of constraints.

When Roosevelt Island was rebuilt in the 1970s, it boasted such then-innovative features as an automated vacuum waste collection system, and Motorgate, a central garage that has promoted a pedestrian-oriented community. Octagon Park will be a showcase for sustainable energy, with roof-mounted photovoltaic cells and geothermal wells for heating and cooling.

In February, New York Gov. Pataki announced the project was eligible for $6.6 million in green tax credits from New York State, which has the nation's first statewide tax incentive program for the construction or rehabilitation of green buildings.

But a few more hurdles need to cleared before construction can begin on the Octagon.
Since the five-acre Octagon Park site is in an area set aside for open space, the mayor must approve an amendment to the island's general-development plan, which architects Philip Johnson and John Burgee created in 1969. "It's an extremely complicated deal,” says Virginia Gleidman, spokeswoman for the city's department of housing, development, and preservation. We're looking at a lot of different aspects of this proposed project."

State Assemblymember Pete Grannis, author of the 1984 bill to protect Roosevelt Island's open spaces, contends that taking a portion of the potential park area for apartments "makes a mockery of the spirit as well as the intent of the law." He says that since the wings did not exist at the time of the Octagon's landmarking in 1976, their footprints reverted to open space areas and must remain so.

Yet Becker's environmental consultants say the law makes an exception for a project that includes rehabilitation of the landmark. Excited by the prospect of the Octagon being renovated, Judith Berdy gives Becker & Becker high marks for their patient cooperation with the community. "What they're going through here over the past three years, any other developer would have walked away," says Berdy, who recently won site control of another island landmark, Blackwell House, for the historical society. Restored by Giorgio Cavaglieri in 1973, the 18th century farmhouse will be spruced up with the help of a $200,000 matching grant from the State of New York.

Berdy hopes to use the Blackwell House to exhibit a few items salvaged from the Octagon: The cornerstone of the south wing, inscribed MV BRADY, MAYOR, and part of one of the Greek Ionic columns that Dickens admired. "There's a lot left. You just have to use your imagination, " Berdy says. "The asylum was demolished, but it was never taken away."