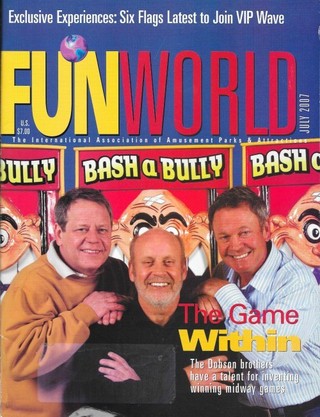 Copyright 1997-2021
Tricia Vita
No part of this website may be used or reproduced in any manner without written permission.

“Everybody’s got a game within them,” says Steve Dobson, president of Erin, Ontario-based game manufacturer Dobco Enterprises Limited. “But to bring it from your mind into an actual prototype design is a whole different thing. There are very few people who can actually do that.”

Among the few, however, are the Dobson brothers—Steve, Mike, and John—who have a knack for creating amusement games people like to play. Their hit parade includes Dobco’s “Wacky Wire,” “Blockbuster,” and “Skatterball,” as well as Bob’s Space Racers’ “Rising Waters,” “Gunball,” and “Dog Pounder.”

The brothers work with one another, “but not exclusively from each other,” adds Steve, whose forte is sales, theming, and research and development.

John, who builds the prototypes in his shop, also has a thriving business refurbishing games. He is the mastermind of the now classic “Wacky Wire,” in which players have to maneuver a looped wand from one end of a vertically spiraling wire to another without touching it. The 1985 game is Dobco’s all-time best seller and remains a consistent moneymaker on midways around the world.

The Wacky Wire was very intriguing because it looked so simple, but it was very difficult,” John says of the game that put a new spin on “Skin the Wire,” which used an inert horizontal wire.

While the old game wasn’t successful because it looked too difficult, the “Wacky Wire’s” spiraling movement caught people’s attention. “Players had to have a little bit of manual dexterity. They had to have patience. And they came so close to winning every time that you got the replay,” says John. “It was a runaway success.”

Mike is a prolific game designer whose latest creations include Dobco’s “Mouse Trap” and Bob’s Space Racers’ (BSR) “Fish R’ Jumpin” and “Dog Pounder.” At IAAPA Attractions Expo 2005, the “Dog Pounder” redemption model was awarded first prize as Best New Product in the coin-op category. According to Jack Mendes, president of BSR, the company receives game ideas from a lot of different sources, including customers, employees, and game designers. “But we’ve probably done more of Mike’s games than anybody else’s,” says Mendes. “He’ll typically develop a prototype, get a feel for how well it will do, and send it down to us. Our staff develops the electronics and mechanical parts. Then we get our artistic people involved and build a finished product.” In the case of “Dog Pounder,” BSR staff re-themed Mike’s alligator with a big mouth as a more kid-friendly dog.

The Dobson brothers, all in their 50s, go their start in the amusement industry as teenagers operating their cousin’s games at Toronto’s Canadian National Exhibition, also known as “The Ex.” “This was our first job. To get paid to work a game was a novel thing,” says Steve, whose first-ever paycheck of $320, or $1 per hour and no overtime, seemed like a fortune to the 15-year-old. “It was a social thing, too—the girls,” he laughs. The boys were in charge of the slot car racing game in which 16 players “drove” the cars around a figure-8 track from playing stations equipped with steering wheel, throttle, and gas pedal. “We’d sit up on the podium and call the race over the mic,” Steve says of this unique game that got them hooked on the business.

After high school, Mike and Steve worked the Ontario fairs with Conklin Shows through October and found off-season employment as a curling desk manager and a merchandise buyer for Conklin’s bingo operation at Crystal Beach Park. In 1976, their summer jobs grew into careers as game owners/operators when Conklin Shows won the contract for Canada’s circuit of fairs, which stretches from Toronto to Vancouver.
Mike and Steve scraped together the funds to buy four used water race games and headed west, while the younger John found his niche servicing games. Before long, the brothers were looking for new equipment to fill the canvas and lumber stands they’d added to their lineup. “We started designing two games every winter and prototyping them in the summer to see if they worked or not,” Mike recalls.
Expo Regulars

The Dobsons have been familiar faces at IAAPA Attractions Expo since 1984, when Dobco’s “Leap Frog” won an award for best new game. The brothers’ creative association with Bobs Space Racers began with BSR;s purchase of the rights to Steve’s prototype for the water game “Rising Waters.” Since then, Mike’s BSR credits include such classics as “Monkey Drop,” “Crossbow Shoot,” and “Sidewinder.” Mike says he tries to keep the simpler and less-expensive tabletop games over on the Dobco side of town, while the bulkier games with more complex electronics go to BSR. “Both areas are good because you’re servicing different aspects of the business,” he notes.

At IAAPA Attractions Expo 2006, Mike was in BSR’s booth demonstrating his “Fish R’ Jumpin’,” which captured attention because of its small footprint, good looks, and great sound effects. As soon as players touch the metal fish with a pole, the fish jumps up from the rotating table (i.e., the “fishin’ hole”), and there’s a splash. “It’s appealing because it looks so simple,” says Rich Kimak, games and retail director at Kennywood Park in West Mifflin, Pennsylvania, who bought three units and has recommended the game to colleagues at other parks. “It’s a neat game that keeps its own crowd.”
Meanwhile at Dobco’s booth, the featured game was the “Bash a Bully,” a knock’em down game wherein players use leather deadballs to knock down the bully’s teeth.

The original concept—tossing a beanbag at a 3-D fiberglass face—has evolved into hurling a ball at a three-foot-high decal on a flat surface that can take plenty of whacks. “People like to throw a baseball—that’s what they’re familiar with,” Steve explains. “Anytime you move away from that as your object of throwing, [e.g.} a beanbag, they’ll try it just once or twice.” Since IAAPA Attractions Expo 2005, Steve has continued fine-tuning the game by adjusting the depth of the target and taking it up to basketball height. “We already had a test run with it, and the results so far are excellent,” says Steve, who plans to show the revamped “Bash a Bully” at IAAPA Attractions Expo 2007.

According to Mike, it’s easy to build a game that will offer a $1.50 or $3 prize. Since concessionaires generally give out about 30 percent of their gross income toward merchandise, the challenge is to design a game that will accommodate giving out a $30 prize. The game has to look easy but be fairly hard to win.

If a game looks too difficult, people won’t play. Says Steve: “We’ve had other games where they’ve actually been easier to do than the ‘Wacky Wire,’ but for some reason—and nobody really knows why—the public looks at it, and says, ‘Oh, I can’t do it.’ You don’t know until you actually put it in the field. The batting average is maybe one out of 10 games that are successful.”

Mike and John left the operations side to focus on design and production, but Steve maintained a games operation with Conklin Shows, now part of North American Midway Entertainment. We do a wide geographical run, so if the game is consistently good for us as an operator, then, generally speaking, it will work for everybody,” notes Steve, who field tests new games at Calgary Stampede and the Canadian National Exhibition, which attract more than 2.5 million visitors a year. “Volume alone is a great test of endurance as well as productivity,” he adds.

Concession managers at parks and attractions think so, too. Circus Circus in Las Vegas, which runs a year-round operation, is one of Dobco’s best customers.

“Supporting their games has always paid huge dividends for us,” says Brian Chilton, midway director at the casino/theme park. “Because they’re operators, they understand what goes on from the operations side. They’re always looking to improve, and they have the creativity to create new games, test them, and bring them to the market.

The simplicity of Dobco’s games is an advantage since the casino welcomes visitors from all over the world. “The ‘Blockbuster’ has been fantastic for us,” says Chilton, who has three of these games. Chilton compares ‘Blockbuster’s” kiddie-like alphabet blocks, piled three high on a pedestal to a knock-‘em-over milk bottle game brought to a straightforward level.

At the same time, Circus Circus has a 30-year association with Bob’s Space Racers, and after testing both the redemption and six-unit “Dog Pounder,” Chilton purchased both models. “It’s the next step up from a ‘Whac-A-Mole’,” he says.

Steve, Mike,and John Dobson have a way with games. As teenagers they operated the slot car racing game at the Canadian National Exhibition--which sucked them into the industry. Since then they've had a knack for creating fun, winnable, and visually enthralling midway games. Funworld, July 2007