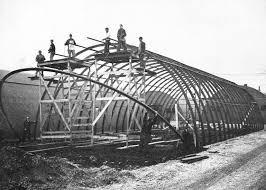 Copyright 1997-2021
Tricia Vita
No part of of this website may be used or reproduced in any manner without written permission.

Every Wednesday, elderly veterans of the Navy's Construction Battalions, the Seabees, gather in Davisville, R.I., in a World War II-era structure called a Quonset hut, one of six that they are helping to restore. They meet at the Seabee Museum and Memorial Park, just north of Quonset Point, R.I., the town where these corrugated steel, semi-cylindrical prefabs were first constructed in 1941.

During the war, the U.S. Navy erected more than 160,000 Quonset huts on four continents and throughout the Pacific. "A team of eight Seabees could assemble a barracks in eight hours by just driving nails through the ribs," says Commander James Monroe, the Seabee veteran who heads the museum.

Designed for the Navy by architects and engineers of the George Fuller Construction Company, the units measured 20-by-48 feet or 40-by-100, and came with blueprints for over 40 different uses. Wryly described as "tin cans" by GIs, these lightweight, portable buildings were later sold to the civilian world. Surplus huts eased the post-war housing shortage in American cities and university campuses, where veterans studied under the GI Bill. Before long, the term "quonset babies" entered the popular lexicon.

Today, many communities question what to do with their surviving Quonset huts. (No one knows how many exist today). Some say the structures should be preserved; others describe them as "eyesores" that should be torn down.

Last month, for example, the demolition of historic Quonset huts in Kentucky and Colorado made local headlines. In Bowling Green, Ky., a quarrel erupted at the Oct. 16 demolition of the former Quonset Auditorium when workers prevented the man who built the once-popular music venue on the Dixie Highway from salvaging glass blocks from the facade. Used as a tire store since the 1970s, the property was destroyed before the expansion of a watertreatment plant. In the Quonset's place, the utility plans to install a commemorative plaque.

In St. Petersburg, Fla., however, the c. 1948 Royal Theatre, a designated local landmark, is undergoing a $600,000 renovation funded by block grants and private donations. Fitted with a marquee, the theater was one of the city's few movie houses for African-Americans. "The community still fondly recalls going to the Royal with their soon-to-be husbands and wives on dates," says Rick Smith, the city's preservation planner. "So it has as much a social and cultural affiliation as an architectural one."

A group of residents in Parker, Colo., lost a lawsuit to prevent the mayor from demolishing a 52-year-old Quonset hut to make way for park improvements. Now the group is petitioning to recall the officials who approved the demolition. While the mayor contends the group stepped forward at the last minute to save the disused community center, some residents fail to see what all the fuss is about, calling the building ugly.

"If it's a high-style Victorian, we can always appreciate why it's significant, but if it's something modest, or something we associate with more recent architecture, then it becomes an uphill battle," says Karen McWilliams, a preservation planner in Fort Collins, Colo., one of the few communities that has surveyed its Quonset huts. Because the city has five Quonsets in an area that is ripe for redevelopment, McWilliams commissioned Adam Thomas of Historitecture, a consulting firm based in nearby Estes Park, Colo., to compile the report, which was published last summer.

"When I first started knocking on doors and said, 'I'd like to see your Quonset hut and take a picture of it,' people thought I'd landed on Earth from Mars," Thomas recalls.

Many of the 200 huts sent to Colorado State University in 1946 were later resold to farms and other businesses in the area. Thomas discovered that Fort Collins' 33 prefabs came in quirky shapes and sizes: A half-quonset resembled a quarter of a pie. Gambles department store sold a kit-built wood frame. Despite their history and quirky charm, few Quonsets are listed on the National Register of Historic Places. Thomas says the Register's standard of "integrity of location" didn't readily apply to Quonset huts, which he says "were manufactured in one place to be assembled someplace else, and were meant to be easily disassembled and moved somewhere else."

In an emergency rescue effort, the Seabee Museum had to relocate two of the 17 Quonset huts from Camp Endicott's Davisville Historic District, the original home of the Seabees, which was listed on the National Register in 1977. After the base closed in 1994, the Rhode Island Economic Development Corporation began marketing the site as an industrial park, and the World War II-era buildings were slated for demolition. In 2002, the corporation signed a $1 per year, 25-year lease with the museum, which is expected to invest $1.3 million in construction and site improvements.

Last summer, the Wednesday Seabees crew got some help—447,000 man-hours' worth—from a group of reservists. The Department of Defense also pitched in when it gave the group $100,000 to rent equipment and sent over a lieutenant commander who was an architect to help with the restoration. Commander Monroe says he looks forward to showing off the six restored Quonsets to his fellow Seabees at their national reunion in Rhode Island next July.

Oddly, the only National Register-listed Quonsets no longer exist. When the airport in Lansing, Mich., expanded, Darlene Smith, commander of the Civil Air Patrol squadron there, spent three years dismantling, packing, and moving the three huts, which were added to the Register in 1991. Then a tornado tore and twisted them, leaving nothing to reassemble. Still, her efforts were worthwhile, Smith says.

"The simplicity of the huts is what caught my attention," she says. "Otherwise, why would anyone give a hoot about a tin-can sort of thing?"

For information on the museum, visit www.seabeesmuseum.org.